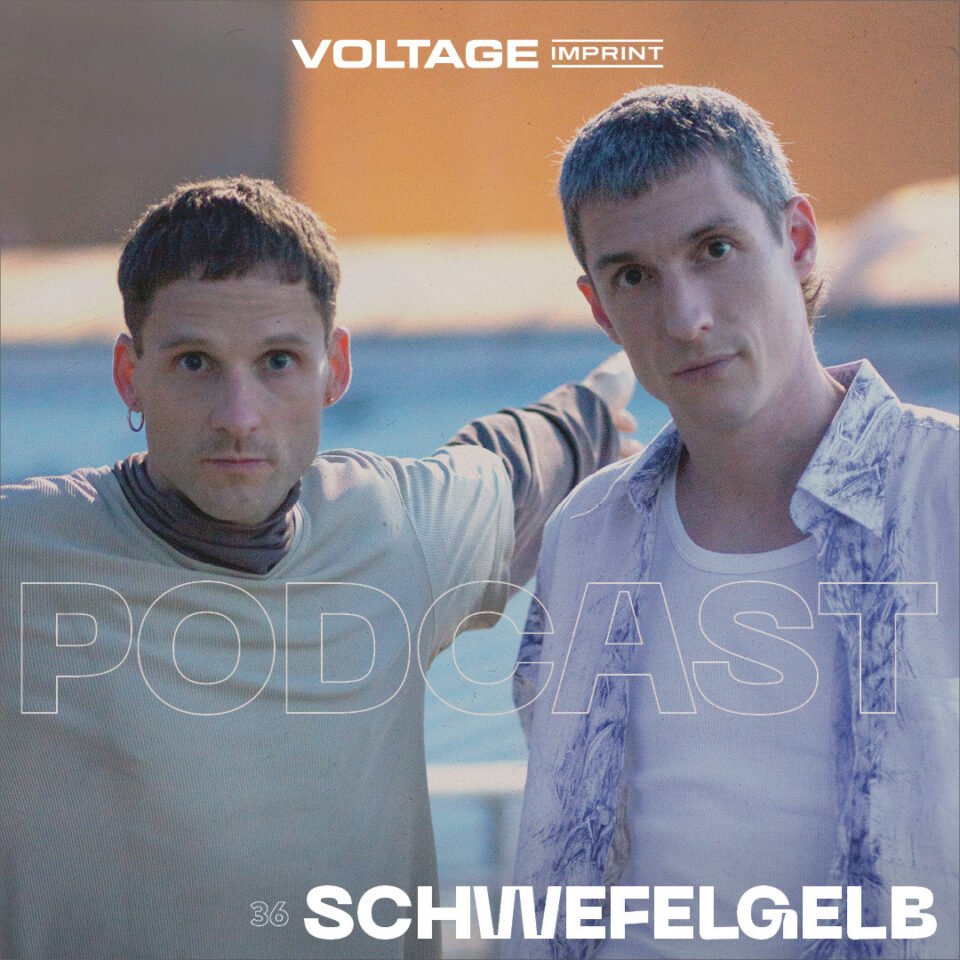 Bursting onto the scene with their unmistakable sound, Schwefelgelb's take on techno makes for raw, heavy records that have been employed by the world’s greatest artists of the genre. Their grip on the underground electronic music scene since the early 2000’s has hardly loosened, backed by a string of powerful releases.

Take us step by step through your artistic process when creating a song?

There’s usually no plan, but only a process of experimenting at the very start. We do patches with hardware and create circuits with all kind of devices involved until we stumble across an inspiring sound which seems to bear enough potential to be a key element of a new track.

Often this sound-design process happens along a rudimentary kick and hi-hat layer to get afeel of how well it will integrate. Most of the drums and percussions are added with Elektron Rytm. Everything converges in Ableton Live as separatestems. There, a lot of processing is added – that is mostly delay, reverb, compression and loads of EQing. We like to use step sequencers for melodic elements. As with the sound-design process, they give you possibilities to find something by accident, which is better than anything you could envision before. That could be due to randomized or un-quantized parameters as for example.

Once most elements have been found, we start a jam session and might easily record 60 minutes of it. We pick the best parts and try to arrange them.

To finish a track it takes us a lot of time. Often, it changes its character many times, because we like to swap elements between different tracks, to see what fits best. So an already good track, might turn into an even better track, because we swap its bassline, which was previously used for another draft of a track. Vocals are being added at the very end. The lyrics originate from a notebook full of thoughts and descriptions of photos and sceneries. After all, we think it makes sense to leave a track aside for a while to reconsider it later. Right after you finished it, you’re usually too proud to evaluate how strong it really is.

How do you balance the collaboration?

Both of us have home studios and since we are neighbors, one can always join the other spontaneously. Sometimes we meet to start something from scratch together. Other times,one brings a groovebox with some new sketches and then we elaborate it together. Just for the jam session we have to work together necessarily. It takes four hands.

How do you know when a record is ready for release?

In regards to the space on a 12" vinyl record, we usually think in four tracker EPs and the nadd a remix as digital bonus track. Basically, we produce all of the time, that is whenever we can. If we have four drafts of track sthat combine together sound-wise and also have a narration, we begin to shape the whole package.

Talk to us about your upcoming record, how did it come together?

This EP's structure is 3 + 1 + 1. The main emphasis is on three clubby dance tracks, but it appears versatile due to one broken beat track and last but not least the external view by the remixer. We used the same concept for the previous release. It was produced in the manner described above pretty much.

Just "Weit Genug" started with a sample of a shaman's drum, which is a rather uncommon approach for us. The lyric phrases for this record have been written under the impact of the war in Ukraine, but in a very abstract way

Brussels-based Öspiel is on remix duties, how did you get in contact with him for this?

We came across Öspiel through his release “Only You And I Will Remain” and we really like to play it. It’s a hard sound but not just pounding – it’s quite complex. We like his high quality and detailed approach to producing. As for the previous n-PLEX releases, we wanted to add a remix by some artist who we appreciate. So we got in touch with Öspiel on social media and finally got to know him personally in Berlin, a month ago.

How has your live set evolved, if at all, over the years?

To be honest, it didn't evolve much regarding the setup. We use a laptop with Ableton Live. Thus we have a lot of technical possibilities, which are not visible to the audience. Meanwhile, for years already, we use a lot of strobe lights which became almost a signature for our show.

The setup is pretty stable and practicable, which is why we only apply little changes. As for example adding a piece of metal for big percussive impacts. Rather than technical changes, we sometimes reconsider the stage design. We tried to involve big strips of plastic foil to create an artificial room once, but it didn't really work out. Right now we're thinking about visuals, but it seems pretty clear that our performance is more intense if there is less distraction.

After years of being active in the scene and releasing here and there, your label, n-PLEX, started in 2020. What was the reason or goal to start this new imprint?

We have a quite distinct vision of what we want to do musically and visually. The communication with other labels didn’t work well enough to discuss things properly. We always knew an own label would be the solution to this, just we hesitated since we didn’t want to have to deal with administrative work.

Eventually, we did it anyways and it turns out that working with our distributor Triple Vision makes the process relatively easy. Now we are free and a release can appear however we want it to.

You only have Schwefelgelb releases on n-PLEX so far, will you be releasing other artists in the future or keeping it a self-release imprint?

Of course the first reason to start it was to get back control, but n-PLEX isn’t meant to be a self-release imprint. Just, it's very important to us that we not only like an artist's music, but also the person behind it. Also, we don't really reach out, but in stead wait for it to happen casually. It has to be said our motivation is not to grow as a label and become popular, but to support beautiful music and people whenever the time seems right.

How did you come in contact with a+w for the original release of 2017’s “Dahinter Das Gesicht” and how has the record impacted your career at this point?

We knew the a+w people personally for some time before. It appeared to be a coincidence that we finished the demo of "Es Zieht Mich" right before the a+w Boiler Room issue in 2016. When it was played there, it marked the starting point of our three releases on the label.

It seemed to be the right sound at the right time. We got quite popular within the subculture, which resulted in playing a lot of shows all over the world. We are very thankful for all the experiences we are able to make ever since. Even today, these tracks are being used for Balenciaga advertising or movies for example. "Dahinter Das Gesicht" is still a highly demanded EP, which is why we re-released it on n-PLEX last year.

How has your sound evolved since the first release and are there other genres you’d like to test together or separately in the future?

Looking back onto all releases it's very obvious that our sound keeps evolving, indeed. We know other artists would rather split it into different monikers, but we just decided to keep it all under Schwefelgelb. It simply reflects our personal musical evolution which is heavily influenced by the exposure to current movements in club culture.

No need to explain that playing a lot of shows and by that participating a lot of parties, it changes your taste. You get bored of a certain sound and find interest in another one. Take the before mentioned "Dahinter Das Gesicht" from 2017: it could be described as a fusion of EBM, Industrial and Techno at 128bpm. Take the upcoming "Whirlpool-Gedanken": it's referencing Detroit Techno at 136bpm. And it will keep changing. It seems to be well-grounded in our personalities.

Is there anything coming up for you guys you’d like to mention?

We will donate all(!) bandcamp vinyl sales of the upcoming EP to humanitarian help for Ukraine. Release date: 11th of November 2022, pre-order start: 7th of October 2022, Schwefelgelb: “Whirlpool-Gedanken”, NPLX004.

Next up: Kairos & Dress